2014 held some pretty spectacular opportunities. After touring Bike Smut all by my lonesome from Minneapolis to Montreal to Mexico last year I took nearly entire month break before embarking on a 6 month tour of Europe! There are a flood of memories but Ill hit some highlights:

* On my first attempt I sabered a bottle of campaign on my birthday over a sellout show in Lyon, France.

* accompanied Miss Poppy Cox to Marrakesh, Morocco, my first time in Africa (surprisingly affordable when you fly from Paris). We explored countless markets and I repaired and immediately lost my Ortlieb backpack which had been with me everywhere since 2008. I really hope someone is appreciating her.

* caught the midnight train from Amsterdam to Zurich and the thieves lived up to their reputation, stealing my handlebar bag resting on the shelf above my seat. I had the foresight to put all my money, documents and precious items on my person but they got a bunch of bike tools, maps, most frustratingly, the reader for my wireless bike computer. I bike toured about 8 thousand miles with that computer still attached to my stem because I keep thinking Im gonna find a reader for it.

* took a ride around Mt Etna:

Among the great things Catania has going for it include Europe's largest active volcano, Mt. Etna. Dwarfing Mt. Tabor (Portland's own volcano), Mt Etna covers an area 1506 times as large. Where you can ride the circle on top of Tabor in less than 60 seconds our circumnavigation of Etna took about 10 hours, alternating from pavement, to gravel, to sand, to wooded paths, to boulders, to expansive lava flows and back to pavement. But if the surface was varied the climate was constantly changing! On our circumnavigation our elevation was mostly between 1,500 and 2,200 meters and we got no shortage of weather. Full sun, driving rain, sleet, snow, and brisk winds so strong I found myself braking on an incline! After traveling and biking for so many years you start to think you have seen it all, then you realize you are accelerating beyond your comfort going uphill and you haven't pedaled in the past 30 seconds. That was surreal.

After leaving Sicily bike I bike toured most of Italy, from Genoa, to Turin, to Milan, to Modena, to Rome, to Napoli, to Pescara, to Ravena, to Bologna, to Vincenza, to Padova, to Venice, to Triste. And on to Slovenia, Croatia, Austria, Bavaria, Czech, Saxony, Denmark, Sweden and back to Berlin.


We performed for many social centers and nonprofits

Photos you say? Okay but only a handful... im quite a poser and can't be here showing off for you all day.

On the right is a children's book i saved from the trash in Sicily, Huey Dewey and Louie are replaced with Qui, Quo, Qua (in Italian, Who, What, Where). I wouldn't suggest you try and learn Italian with such a book except its got this illustration of an adolescent duck checking out a naked boy with a magnifying glass.
In the middle is the note a kind lady on a train made for me to review the difficult letters and when they change pronunciation.
On the left is a promotional card for Aftermass, a feature movie I made with Joe Biel of Microcosm Publishing. It felt pretty cool to visit these places with some ideas about how we movie out bodies and also able to say a few sentences.

Strangely not pictured is my Black Star Bag fannypack: $, passport, glasses and my  OhShitKit: bike tools, pills, & my precious whiskey flask (thanks Sysfail, Wonderthighs and TRolf who made that possible)

Touring Italy provides a good challenge when you want to sleep. There are almost no camping sites and those are designed for motorists/RVs. However if you take some care to plan your day you can find the very infrequent accessible DL camp site.

There is a dearth of natural environment in Italy. But I did find a few critters who were still making the most of it. This night in  I even heard a wild boar nearby which was, actually quite terrifying. If I was badly injured there was little chance the body would still be warm when they found me.

I found a monument to Musilini, who besides creating a fascist police state also helped the people in Orbetello by installing some sanitary features. This creepy statue was on the same hill.

here you see the water made clean by Mussolini, aka Il Duce. His nickname reminds me of The Douche which in this case is all rather fitting I suppose.

apparently there is a tradition of getting naked on a rooftop in Rome the dawn after their big annual Critical Mass ride. Thankfully I still had the necessary vestiges.

Leaving from Rome to Napoli we have a team of 4 bike punks. A Brazillian balloon street artist, a German "SuperCool!Craftsman", and a tall bike touring Italian.

The Italian Tall Touring Bike features extra wide handlebars for loading all of your weight on the front. Take extra care when parking.

for the entire North American and European bike tour this was the only time I had anyone join me. It was really excellent having a team for a bit!

The Critchella in Napoli. In the background the screams of thousands of Pompeii residents still drift around Mt Vesuvius.

Crossing Italy from the Tyrrhenian Sea in the west to the Adriatic Sea in the east put me in Pescara. There are some great bike paths in Italy which end abruptly and turn into highways.

Bike punks i had met in Milano and Rome found their way to Bologna. Here Ela works to turn bikes into the Bike Smut mise en scene. Im particularly proud of framing this picture so the step of the bike is getting pissed on.

they do a regular DIY market at XM24, with loads of people trading goods and such its a pretty festive place.


The city wanted to expand a traffic circle meaning it would tear down a wall of the squatted social center. For some time there were clashes with police and threats. At one point Blu the street artist had made a beautiful 20-foot tall mural on the wall of XM24 that was on the chopping block. It depicts the government vs the squatters in a Lord of The Ring battle. The mural has since become so popular the city is no longer able to tear it down. A fabulous use of art. 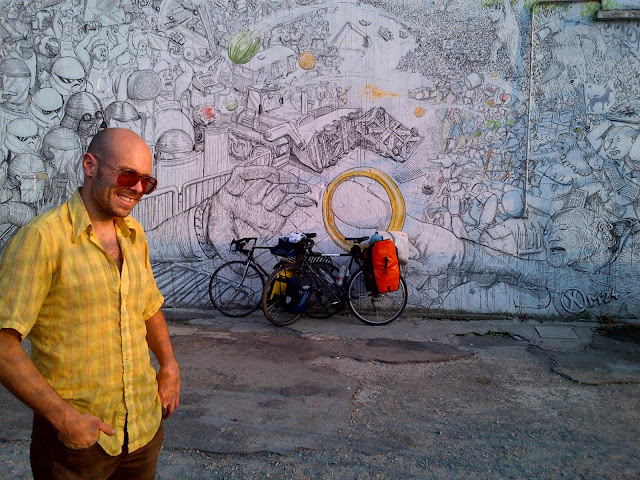 So I guess they have not had enough.

Padova hosted the Euro Bike Polo Championships somehow i ended on a team from Austia. We got to play former world champions Wolfgang in our 1st round .They were very skilled.

Venice is a pretty amazing place. Somehow my friend Allesia and I were able to spend a whole day there for less than 20-euros. I think we may have set some sort of record.
Leaving Venice I caught a train to Triste, the end of the line in Italy, where Slovenia has a tiny piece of beach property before you get into the endless beauty of the Croatian Islands. I wanted to explore them but bikes and boats are not always very convenient. So I went due east and immediately started up a +20 degree hill justting out of the Adriatic Sea.

by the time I got to the top I felt like I had accomplished a lot. I was able to avoid most brutal climbs but this was one i wouldn't be able to avoid and it was Bru-TAL! With cars screaming up and down the cobble roads at high speeds. I expected that I would have to push the bike but thankfully the double chain ring gearing was just enough

Slovenia was my favorite country in a few ways. In a way its not ideal to go there right out of Italy because that is one language they really don't want to listen to (and they all speak English pretty well) but mostly because it felt like my home state of Oregon. Its clean and polite and earnestly interested. (at least I think to think of Oregon like that) .But bike touring through the forest and smelling that pine was quite heavenly. Plus they had some interesting DIY spaces along the way

Leaving, however was more difficult. I had been following Google's directions which had a border crossing just a 10 clicks north of the main highway crossing into Zagreb, Croatia. The border guards were not so keen. They took my passport and went through the motions and then told me that it wouldn't be possible for reasons they couldn't explain.  Why would you bother having border guards who can speak more than one language?

"You no bike cross"


"I just saw a person bike across"


"Can I walk across?"
They made me turn around and go back to the train station several miles back. When I got to the station they told me I was not allowed to take a train with a bike until after rush hour (like 9pm). That was gonna mean I was getting into the squat after midnight and seemed a terrible idea. So I tried the next option. Ride on the highway! The roads are really well paved but apparently the motorists are very concerned about my safety because someone called in the police and just before I had finished biking the 15 miles to the boarder I was detained. A prolonged conversation resulted in them taking me to a gas station and having them ask random motorists if I could jump into their vehicle so as to cross the border without creating an international incident. After more than an hour they found a large bus carrying  the Slovenian National Women's Basketball team and together we went to Croatia. It was a surreal experience. 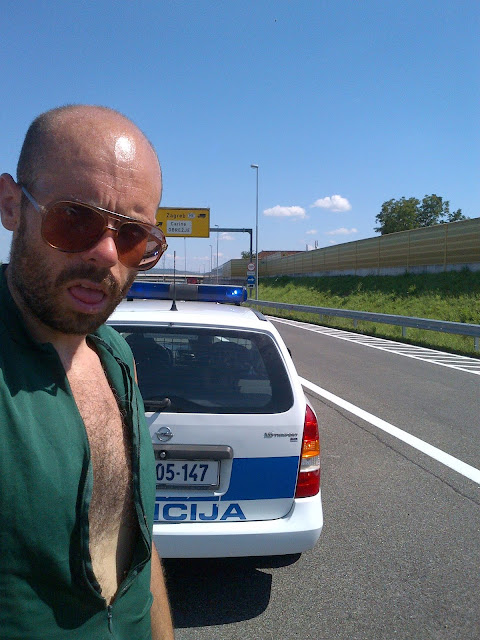 There's a lot more stories; if you are kind, curious and patient I will share them with you. 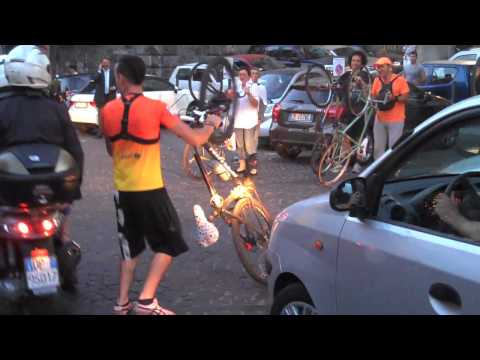