[not from the Onion newswire]

A "complete bullshit" was called early this Tuesday morning in relation to The Pornography of the Bicycle not being shown in the state of Tennessee. Jacob Malbro of Richmond VA was explicitly upset at the cancellation of the Nashville, TN show this April 1st. "

Resident and local bike organizer, Joey Jello was similarly overwhelmed by the "perfect shitstorm" that has befallen The Goddamn House, the Nashville venue expected to host The Pornography of the Bicycle.

"I have to go pee first, but then I would love to give an opinion."

"The crowd was very receptive. We try and hold down the overtly sexual and possibly offensive topics."


Thanks to our hosts and all the productive after show conversation that gets to happen.
Posted by revphil at 10:22 PM No comments:

Email ThisBlogThis!Share to TwitterShare to FacebookShare to Pinterest
Labels: Chapel Hill, Colorado, Denver, The Pornography of the Bicycle

Nashville or Memphis or Neither? ACK! The punk house backyard where we had hoped to show The Pornography of the Bicycle in Nashville has apparently imploded!

Will Memphis step up? These folk look pretty good: http://www.revolutionsmemphis.com/

On the plus side, we may have a space in Denver!

Oh the fast paced action of the bicycle pornographer...
Posted by revphil at 11:12 AM No comments:


Richmond, VA (RVA) is a pretty amazing place. You have a blend of Art students honing the craft at the highly toted Virgina Commonwealth University, the shadow of the Confederacy in the form of massive statues of General Lee and Stonewall Jackson, the depression of the 80s grinding development to a halt, and tons of fun loving bikers enjoying the cheap rent. Development and gentrification have come to the Oregon Hill neighborhood of RVA, which two years ago was a verifiable bicycle ghetto, with all sorts of characters drinking on the tightly spaced porches basking in the sun.

Some things have changed, but there is still one bike club in town inspiring others from across the east to rally and display their pride. Bike clubs in Dayton, NYC, Atlanta, Chicago and more all represented .

Portland, Oregon's Zoobomb came, saw, and dropped the competition like it drops its pants. Zoobomb took the only prize for the team oriented competition. Placing in every event except the 6 pack relay (we are only a little embarrassed about this). Solid performances the entire day capped off by a strange award party and news broadcast about the awesomness that has just ended. Conveniently enough their massive 6-ft trophy for 1st place was designed(?) to collapse into a medium sized bag. Im sure the Dropout Bike Club from Portland will take the challenge of reconstructing it without trying to blend steel and aluminum

We want to thank all the great hosts, and we hope to get kicked out of more parties again someday. Here is a link with lots of videos.
http://www.truveo.com/tag/slaughterama

Bringing the "red light" to The District

And just like that, a screening in Washington DC happens is CANCELED!!

Due to an abundence of awesome, sexy people the biker community and other related drunks of our nation's capital have arranged for an emergency screening!

Thanks and a pornographer's ransom go out to Gwadzilla for kicking our asses and making this happen.

Posted by revphil at 6:45 PM No comments: 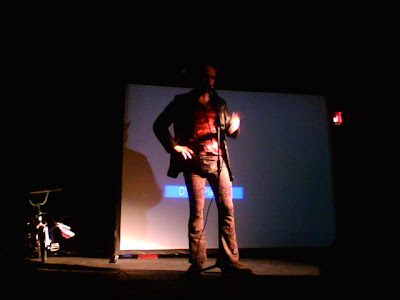 thanks to full time documentarian (and part time cell phone photographer), Steev Hise who has been fighting a media war of his own with "On The Edge: The Femicide in Ciudad Juárez"

we are still looking for a venue in DC. Keep your genitals crossed!
Posted by revphil at 5:34 PM No comments:

Getting Lucky in Philly biking along south street an hour ago we spotted something different. The brick buildings were suddenly replaced by a living collage of glass bottles and bicycle wheels. Upon further investigation we discovered Philadelphia's Magic Gardens.

We were hungry and tired and hungover, but taking a moment to breathe inside this highly detailed art space was refreshing. Then we met Isaiah Zagar and told him about the program. The next thing we know he has us on the phone with The Theater of the Living Arts hooking us up with a projector!

So Philadelphia, it is on. This is a very special location and we are exceedingly gracious to be hosted here.

Email ThisBlogThis!Share to TwitterShare to FacebookShare to Pinterest
Labels: Magic Gardens, Philadelphia, pornography of the bicycle

UPDATE: A CALL OUT FOR A PROJECTOR HAS BEEN MADE

A screening Tuesday night is hopeful. Let us take a moment to address the nature of "bad sex". That is not just unwanted sexual activity, but also lame sex. We know that many people suffer disspointment in their sexual endevors. But how are people to learn more about their sexual interests?

Not encouraging appropriate sexual behavior is a most dastardly thing. Those that perpetuate a society of sexual fear are seriously fucking it up for all of us!

Please, help us demonstrate to Philadelphia... help with recognizing the art in our bodies, how they move and how we and bicycles can become connected.
Posted by revphil at 1:23 PM No comments:

On the on the Hill

NYC conjours up so many astounding memories,

And now we have the most efficient polo game I had ever seen.

Seriously, amazing that they are organized to have a stack, and it works.

Does this make you hot? Maybe you should put your pants back on. Im getting uncomfortable.

Email ThisBlogThis!Share to TwitterShare to FacebookShare to Pinterest
Labels: bike polo, NYC, pornography of the bicycle

"You want me to put my junk where?"

"Our town is small and humble but we love bikes," they say.

"Won't you get nasty in our bottom brackets," they say.

Alas, the Internet can be so cruel.

For all the attempts to get a screening in Boston, Phily or DC nary a venue has stepped up!

Wont someone take us?


As it stands in the North Atlantic cost the only place you can watch The Pornography of the Bicycle is:

The responses from cities have been highly varied. A Report from Columbus describes a black fixie with bright pink Drury grips who lamented not having a camera to document all the sexy action that happened after the movies playing. After the screening in Mnpls a fashion show began 4am. In Chicago, a oversexed riot nearly broke out and many audience members felt necessary to relieve themselves.

But every city is different. Just last night we witnessed the quietest screening ever. The tension in PGH was so high that even the comfy chairs of the Shadow Lounge could not overcome the heightened states. "Shocked" is how one person described the audience.

Perhaps bike sexuality will find a home here. Pittsburgh could be the biker's gem. We are excited to do some exploring.

For no particular reason we have had no issues with police to date. Maybe they are more understanding then we realize.
Posted by revphil at 9:06 AM No comments:

Email ThisBlogThis!Share to TwitterShare to FacebookShare to Pinterest
Labels: NYC, pittsburgh, pornography of the bicycle, report

Though much harassment and threatening emails we have a venue to screen The Pornography of the Bicycle in Pittsburgh!

This coming Wednesday, March 19th we are gonna see how hard the sexy cyclists can get! 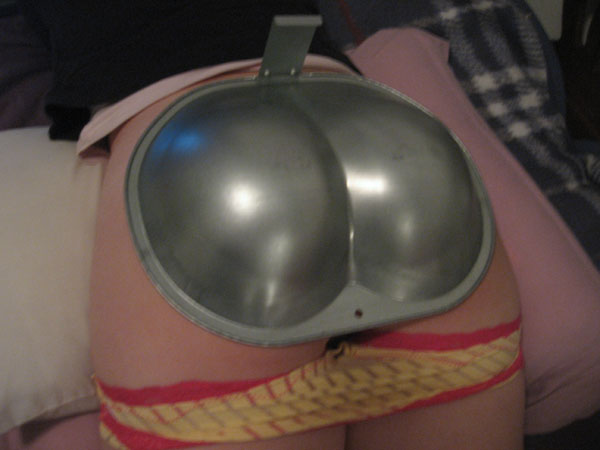 Email ThisBlogThis!Share to TwitterShare to FacebookShare to Pinterest
Labels: pittsburgh, pornography of the bicycle

NYC is getting excited for the hotness coming their way; we have more supporters steeping up to make the show even better:

Thanks to Continuum Cycles and Laek House for making our shows even better! Remember kids Cashama is a cozy 80-seat venue so it might be hard to get in. Lucky for you we have an unprecedented three screenings this saturday at 7, 9 and 11pm

What are you gonna bring? Better get your wheels polished.
Posted by revphil at 10:33 AM No comments:

Email ThisBlogThis!Share to TwitterShare to FacebookShare to Pinterest
Labels: NYC, pornography of the bicycle

crap, this actually got us pretty hot.


Mini Bike Winter 2008 montage from millz on Vimeo.
thanks to millz and the Santa Cruz crew for doing it better!
Posted by revphil at 10:25 AM No comments:

Ever caught looking at someone too long? sexy bikers can do that to ya. sexy bikes too. wanting someone else's ride is a dangerous proposition. Consensual bike love is great!


UPDATE: chicago is primed and ready to fuck bikes!
Posted by revphil at 5:59 PM No comments:

Rounding them up on Rawhide!

due to unsatiable demand we are screening The Pornography of the Bicycle at a private residence in Rapid City, TONIGHT!

Nearly every history of bike culture (and specifically mutant bike culture) includes Minneapolis. It seems about time we introduce ourselves, and what love we are getting! We had almost given up on finding a venue when some local kickass bikers decided to make it happen! 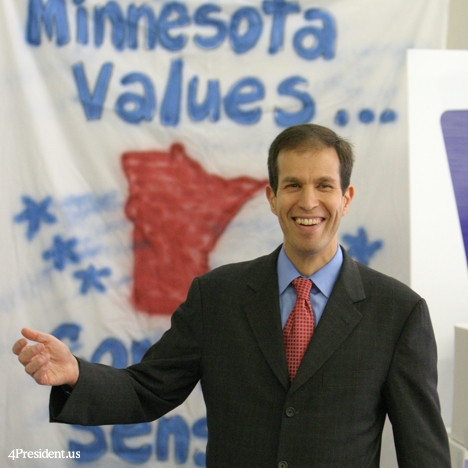 Besides showing awesome movies we are educating people on the nature of Free Geek. Come by the Walker Library to learn more about this kickass nonprofit and the people who are starting one in Minneapolis.

Fun fact from Wikipedia: Minneapolis has the fourth highest percent of people who are gay, lesbian or bisexual, with 12.5%, lucky for us zoobombers are so gay.
Posted by revphil at 9:51 PM No comments:

If you are riding a bike can get off anytime you like. It is part of the freedom inherent in cycling that makes such individualism possible. You jump in and jump out at your discretion.

But what about riding in groups? What about giving up some of your individualism to the will of a larger organism? Is that fun? Is that sexy?

With 75 seats this is a very intimate venue so we are doing a record breaking three screenings, Saturday, March 22nd @ 7, 9, and 11pm.

Admission is only $6 so expect a packed house.

This screening is being partially sponsored by Babeland, who totally are into bikes and sex.

Posted by revphil at 9:30 AM No comments: