Filmmaker Focus #5 Cypress Against Me

Exciting! We have managed to actually continue to present new interviews with our Bike Smut filmmakers! This might not be a big deal to some of you casual readers but our dedicated fans know we can be pretty challenged to maintain a coherent thought! So it is with great pride that we have actually been able to keep it up!

Our 5th interview comes from Gainesville, Florida. Where long time fans of Bike Smut had heard our challenge enough times. "Make a movie, or else we may not come back!" And so we are excited to let em know we are on our way south in your swampy lands.

Half the the filmmaking duo now lives in Boston, where we are showing The Porny Express on Tuesday, Oct 29th. Click here for the details!

Do you have a back story? An introduction to who you are? Do you like flimmaking?  Why? Have you made movies before? What were they like?
Cori:  I suppose our back-story is that we are a bunch of queer people who have lived in the Northern Florida town of Gainesville for ranges of 1 to 9 years each.  We are collectively radical queers, former room mates, former lovers, good friends, comrades, and circus freaks.  I (Cori) moved here on a Greyhound bus when I was 17 and haven't left since.  I'm not an experienced film-maker.  The only movies I've personally made include a short about a magic box of cereal, an epic disappearing-ninja duel, a re-cap of my cat's lesbian wedding ceremony and reception, and the story of a fictitious pregnant man.
Bill:   Prior to this, I had only made chemistry videos for my undergraduate university. So when I was approached by some friends to shoot this video, of course I had to say yes. It's not everyday a future high school chemistry teacher gets to make dirty little secrets her straight laced colleagues should never find out about. 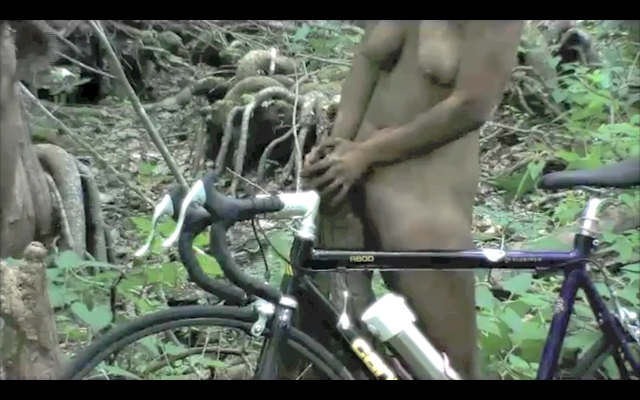 What do you think about bikes? Sex?
Why did you shoot for Bike Smut? What you hope people will gain from watching your movie?
Cori:  We love our bikes!  My bicycle and having the privilege of riding it (especially long distances) is like an emotional release for me.  I hit the trail for a good 30+ miles once a week.  Gainesville, FL claims to be bicycle friendly, and it's trails are ever-expanding.  We wanted our movie to highlight Florida ecology and the city of Gainesville.  We hope it will inspire folks to c'mon down to Florida and bike the beautiful Hawthorne Trail.  Oh, and by the way, the first look-out on that trail makes for some good sunset romance time.
Bill:  If you don't love bikes, you should probably just go home. I moved across the country and my bike came with me. We went from riding flat prairie trails to Boston's blue mountain hills and I would never give him up. We wanted to really show off how great our home state is and show the strong connection we have with the special ecosystem we grew up alongside. We hope people will be turned on by our video and inspired to make their own queer bike porn. I mean afterall, what's porn if you're not getting turned on in one way or another! 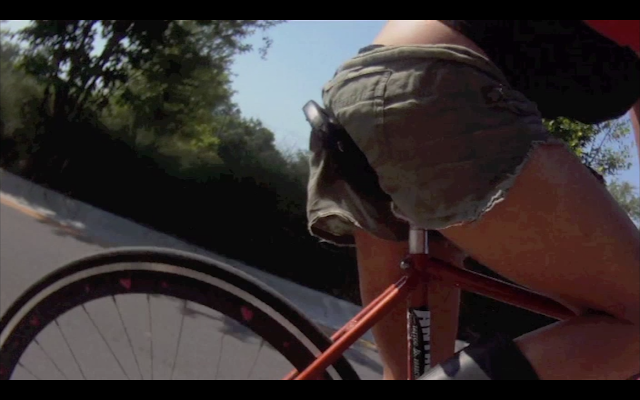 Tell us about your movie. Why did you make such an incredible ecosexual adventure?  How did you chose the music? How were the group dynamics?
Cori:  My initial response to a push from my community to create a film for y'all was "Hey, why the heck not, it'll be fun".  I was so right.  The group that filmed together had nothing but love and brilliant ideas and laughter.  We shared a longer trek out into the woods than is evidenced on film, including a good half hour in the sweltering mosquito-laced heat without a good sense of direction, but we made it to the cypress in good spirits anyway.  The folks in that video are super incredible, talented people that I feel so fortunate to have been close to.  The filming itself involved a conscious element of consent that is inherent in our Gainesville community.  There was frequent checking-in and reflecting on personal comfort levels between all folks involved.  The music we chose is meant to create a transition between the hustle and bustle of city life and the calmness of hitting the trail to wander off on a swampy hike.  We wanted to share some swamp blues goodness with our audience.
Bill:  I think we couldn't have found a better group of people to work with. Everyone was friendly and relaxed and it was really a pressure free zone. I think we had way more fun than we could have anticipated and I feel so grateful to have been a part. What we should have done was filmed ourselves giving each other "tick" searches.. now that's some sexy eco time. 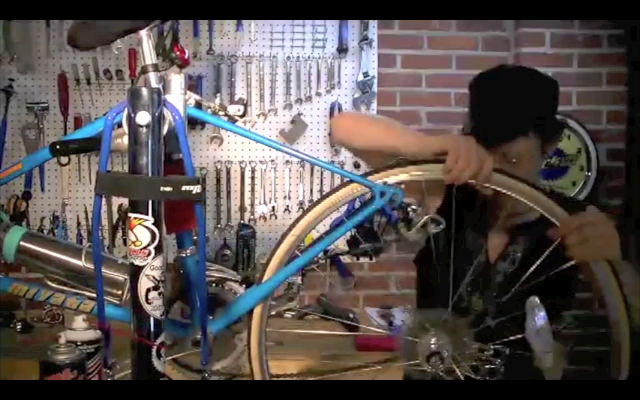 Tell us about the process. What was it like filming outside? How about being sexual in front of the camera? How did you find people to help you make this movie? What were the biggest challenges? What would you have done differently? What about being in that slow moving water? Some people have expressed concern for the players health. Would you like to address them?
Cori:  Filming outside was a challenge due to lighting limitations and time of day.  Our helpful friend Gabe (who is, by the way, a rockin' bike mechanic here in town) lent us a GoPro camera, which attached to our handlebars for some fun motion shots past the downtown utility plant and even caught an angry driver hassling us.  Finding people to film and be filmed was the least challenging aspect.  I'd say some of us were eager to be on or behind the camera.  Having sex on camera almost seemed more of a role than a reality for me.  Though I can't speak for the entire group, I liked that there was more of a playful aspect to our sexuality that day than there might be in private.  In retrospect, I would have liked to get more actual climax shots and possibly more shots of the Hawthorne Trail and wildlife around it.  And of course a higher-res filming device.  As for the slow-moving water scene, we thank the audience for their concerns.  The actor took full responsibility for wanting to film that particular shot and as far as I am aware suffered no ailments in consequence.  The scene itself was shot quickly and I'm under the impression that it wasn't the first time the actor had immersed themselves in swampy waters.  In fact, I'd go so far as to say that doing so aroused the actor.
Bill: The process came pretty smoothly. As the "director" or camera person or whatever I was doing, it became easy to talk to the actors and try to make them feel comfortable ignoring the camera because everyone was just enjoying themselves so much. I would have to say we all were co-directing it together. We all had ideas of what we wanted to do, and it surprisingly was just very fluid. The actors had ideas of what they wanted to do, and so it made it easy to contribute advice to them on how it was coming off behind the lens (no pun intended). All I can hope is that I got good enough shots for the film and Cori did a great job editing them together and making me look like I knew what I was doing. I'm certainly a novice film maker, but I'm extremely proud of what we put together in such a short time. 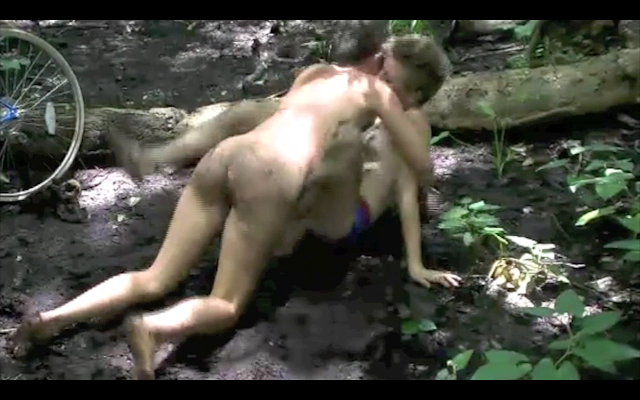 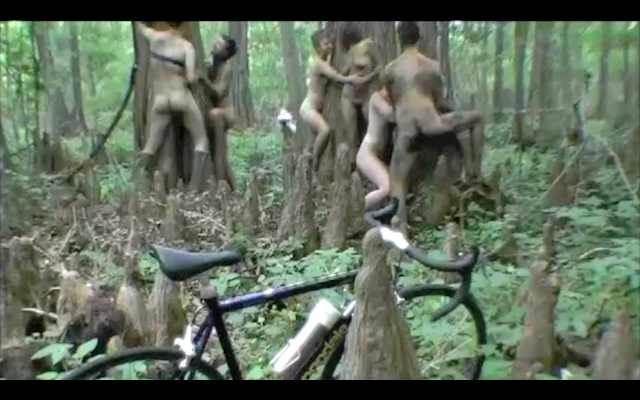 Would you like to shoot for Bike Smut again? What would you tell other potential filmmakers?
Cori:  Yes!  I would love to do another film.  I'd advise other film makers to partner with people they love and respect, set boundaries and expectations early on, and give themselves lots and lots and lots of filming time to allow for the addition of last-minute concepts.
Bill: Absolutely. I think having a respectful connection with everyone you work with is important, and to just go and have fun with it. You'd be really surprised at what you can come up with and the wonderful art you can create from such a great organization inspiring you to do such a thing. I was approached by my friends having not a clue what Bike Smut was, and I have no regrets in saying yes to participating in this film.
Thanks for having us!
- Cori & Bill Nylateher

WHEW! Well I cant say much more than we are THRILLED to share your video! It comes off as gritty, raw and absofuckinglutely genuine. The kind of honest expression of joy and liberation of your body that really encourages the audience to think, "They are enjoying themselves and having so much fun filming it! I can do that too!" which might be the highest compliment we can afford to give a filmmaker without playing favorites.


Cori & Bill, we hope you will make another for us soon!
Posted by revphil at 5:18 AM