Go on a Bike Date! WIth any white girl you like!!

We have been slacking in our reporting of bikesexual industry. Here we are facing the end of the calendar season and we are just now getting around to covering our other, other mission. (ya know, after the bikes and sex and independent and combined political stances we also have to nit pick the various ways others would seek to combine them. Serious responsibilities.)

This is a little sad since there is a newcomer to this market. Moreover we haven't seen much in the way of radical politics from the Bikesexual Calendar Industry since we covered PedalFresh's drive to support water rights by objectifying Portland male bikers. 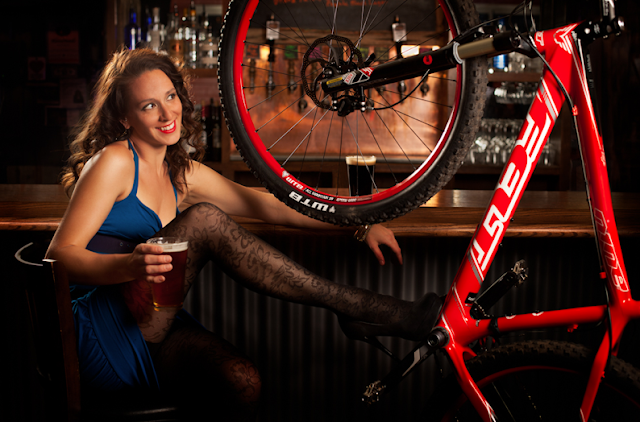 The 2014 Bike Date Calendar depicts women bonding with anthropomorphic cycles in a variety of typical romantic situations including picnicking, drinking, bathing, and going to the movies (we have some suggestions regarding which films to watch with your bicycle).  According to creator Corie Spruill, "Bike Date" is partly a comment on the lack of deep connections between human partners, which Spruill says can be "our biggest frustration with men." 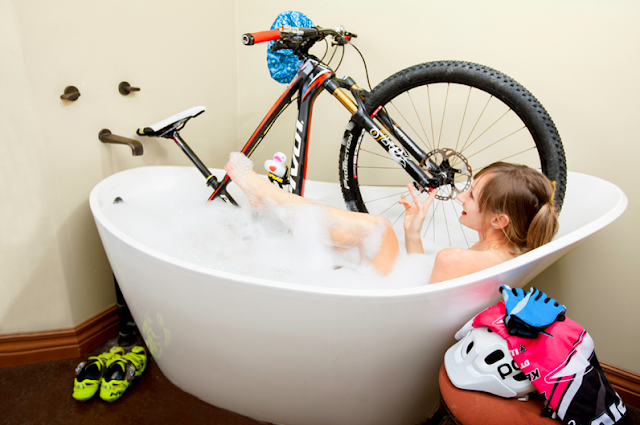 And while it is certainly exciting to see women as active participants in fulfilling their own sexual desires rather than objects we can't help but feel a little disappointed by the selection of models used.

The website states: "After countless women and bicycles have offered her their time and good looks, photographer, Corie Spruill is happy to offer 12 of her favorite "bike date" portraits as a 2014 wall calendar." And yet every single model in the calendar is a pretty damn similar. At first glance we assumed that the same model appeared in multiple shots (this could still be the case and would be a moderately good excuse, actually). The images all depict young, healthy, thin, white cis-women. In fact, only one woman has a haircut that is not mid-length. It is frustrating because while the calendar is a fundraiser to "empower voice and value with women in conflict zones" it serves to marginalize the sexuality of non-standard beauty. Moreover it reinforces the maddening stereotype that all bikers are White.* 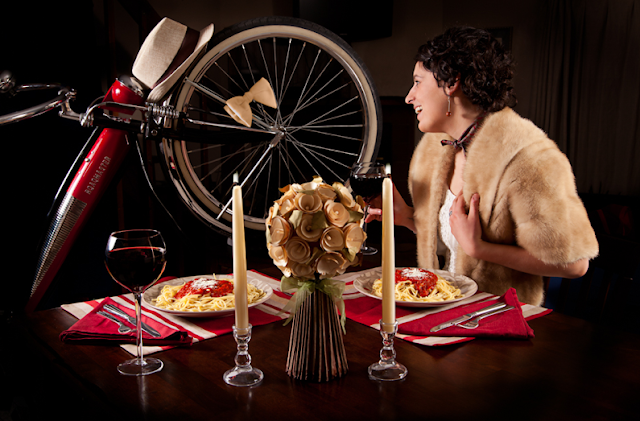 We will forgive this considering the shooting was done entirely in the town of Carbondale, Colorado (population < 6,500 people, 85% of which are Caucasian). Moreover if we look at other bikesexual calendars we dont see much variety in ANY of them! Even the venerable Cyclepassion calendar only has 2 Japanese women along with the other 10 women from Germany, Austria and the UK.  To their credit Cyclepassion only uses actual female racers at models and includes photos of them kicking ass on their bikes as well. 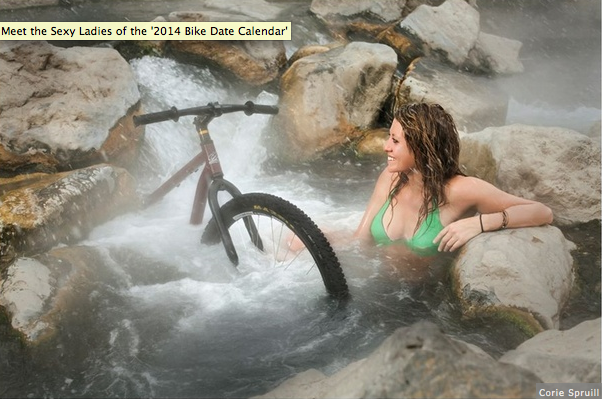 Unlike the models, the bicycles in "Bike Date" come in a variety of types. While there are no mutant bikes, we do get to see a selection of glamorous road, mountain, city bikes and even a tandem providing the obvious innuendo for a menage-a-trois.  Absent from the photos are BMX bikes which we have a suspicion they may have eschewed to avoid the connection to pedalphilia. We know how those tiny wheels can attract some interesting characters. (watch "Confessions of a Pedalphile") 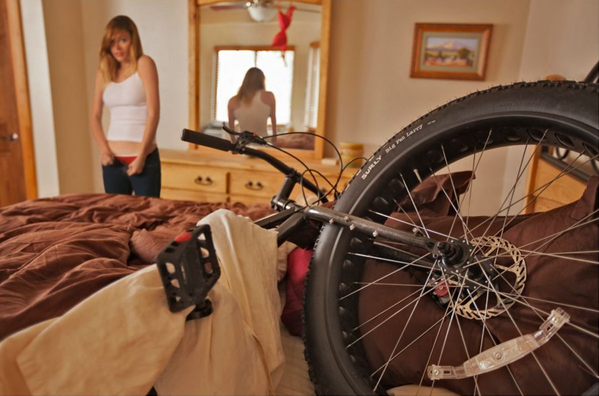 Maybe that is the take away message. That despite the value cycling adds to one's life (be it in the form of improved muscular, mental, communal, economic, or sexual health) the majority of people who are on bikes are still pretty damn white.

Issues of classism (or perhaps just the confluence of racism and transportationsim) aside, the sets, lighting and composition are flawless and fun to look at. On the whole it is an excellent calendar and it helps support a pretty excellent cause. 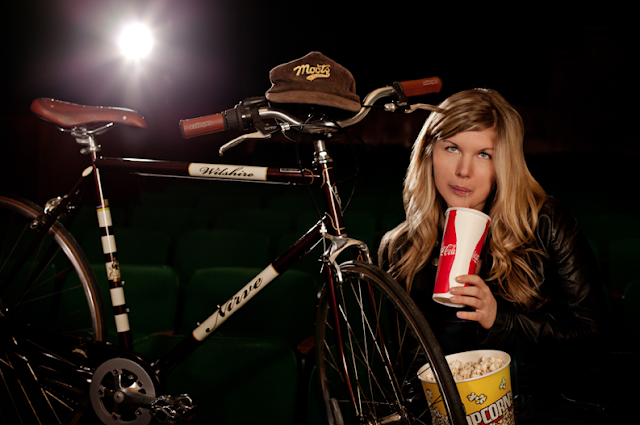 Rather than spread more time hammering on a group of fun loving bikers let us applaud them for their efforts to champion human powered transportation and their own sexuality. Making a well polished calendar is no small task. We sincerely hope they are able to raise lots of money and awareness about Mountain 2 Mountain and that future bikesexual attempts will work in more intersectionality. If we can't work together we will all just end up like so much road pizza... flat meat.

*The all bikers are white stereotype is maddening because, while bikes provide cheap, reliable transport many people in poor communities spend a large percentage of their income on cars which of course loose their value quickly and require a lot of money to maintain. Thus the enticing nature of car culture works to further the status quo. This sterotype also makes existing people of color who do ride bicycles invisible.

Click here to see a brief history of the Bikesexual Industry
Posted by revphil at 9:40 AM