The Westward Ho Bikexploitation Tour encompasses the western United States in October and November. If you are (or know of) fun-loving, sexy bikers in any of these cities we are excited to meat you!

All dates are subject to change without warning. Although we think this constitutes a warning, so there.

Posted by revphil at 3:31 PM No comments: 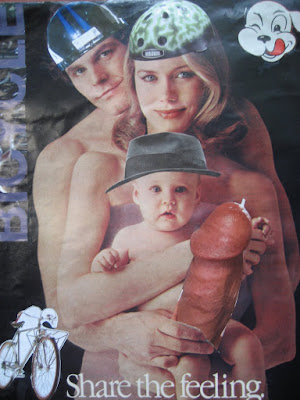 The message is loud and clear: the family that creatively expresses themselves together has babies with dangerously oversized genitalia.

The Cascadian Bikexploitation tour has been rolling strong!
In Bellingham we had 2 near sellout shows even though Western Washington was on break (when do colleges start their session anyway?).   In Seattle the rain would try and dampen us but we were already wet. Such adversities were no match for sexy bikers and the publics demand for origional programming. Crotchs with and without bikeshorts were ungulating on the side  40 ft brick building.  A standing room only show on the inside at the The Mix Lounge + projecting AND both programs back2back on the building across the street left the citizens of Georgetown pleasantly startled. We hope similar exitment on Monday in Olympia as we bring Bike Porn to the historic Capitol Theater for the 1st time ever.
How will Washington's State Capitol respond?
9/22/2008
Screening @ 9:00 pm
Capitol Theater

Posted by revphil at 4:42 PM No comments:

Concerns of inhospitable weather for an outdoor screening were verified in spades this early morning. The Cascadian Bikexploitation Tour is resiliant, creative and most importantly of all, lucky. A kickass gallery just 2 blocks from the outdoor space away from the flooded backyard.

Thanks to the great folks of the FBK who reluctantly gave up their hosting rights so we could be dry.
Posted by revphil at 5:28 PM No comments: 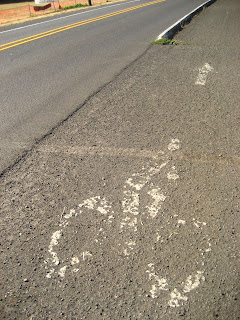 Hopefully there will be no more riots.
Posted by revphil at 1:28 PM No comments:

It is the job of a people to define what is and is not appropriate for a given community. That is the nature of obscenity law.

That being said we have mixed feelings about the "action" going on in the Hasidic Jewish district of South Bedford in Brooklyn. 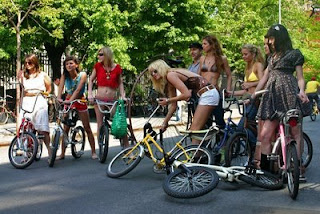 But this news story does bring up an interesting idea, where does the "as bare as you dare" bike ride's freedom of expression end? Can we really say that cat suits are the end of the line? Would a crotchless rekelekh be less disturbing?

With bikers fearing a San Francisco style loss of momentum and Brooklyn Hasids wondering how much leg is Kosher, both sides are left wondering, "when will it end?"

We consulted with a number of bicycle religious representatives about this issue please stand by.

UPDATE: Lee is a Fossilosopher and frequent naked bike rider... so we are certain that publishing his views on this website is totally Fair and Balanced reporting.

I don't know if the Hasidim are really more evil or hypocritical than other neighborhood activists who try to stop bike lanes, but they are so off mainstream, the whole thing looks really weird. Do you know about their religious practice? The men dance to pray (as do Fossilosophers). They come from a mystical movement of 18th century Poland.
http://en.wikipedia.org/wiki/Baal_Shem_Tov

I think the Hasidim in NYC (or maybe this is one loud Hasid) are making a show of their folly in front of the world and i think they feel disrespected and misunderstood as a group and have developed a siege mentality. So this will multiply the misunderstanding
- Lee of Vancouver, BC

So will the disrespect they feel increase and what do you think might happen if they continue to feel more under siege?

Their ritual of dancing to pray leads us to believe that perhaps there is some sort of connection between all things. Imagine... Kevin Bacon is a sexy bicycle messenger in "Quicksilver" MEANWHILE he is told he cannot dance because of religion in "Footloose".

So would these women's protest carry more weight if they said they decided not wearing clothes while riding a bike was a ritual?
Posted by revphil at 2:04 PM No comments: