Opening our Clamshell in Sydney

Sometimes it's hot. Sometimes it's awkward. Sometimes it's funny. Sometimes it is something completely unexpected.
Like with bikes, the joy of sex is not trying to limit the experience but instead just being able to be present in the moment to enjoy the ride.
And its happening tonight in Sydney, Australia 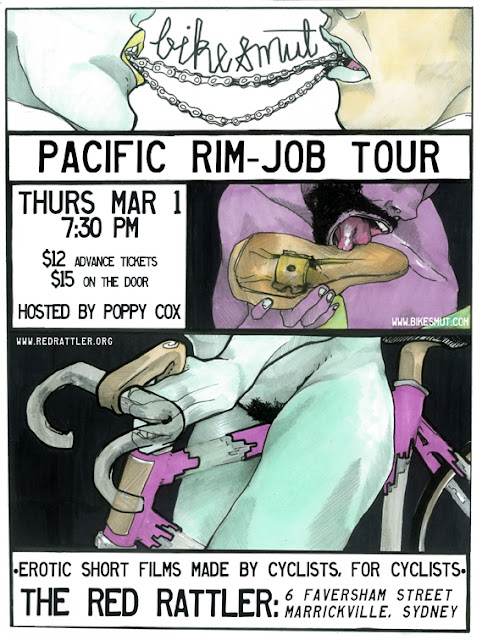 Miss Poppy Cox has just flown in from Berlin to Australia where she is coordinating with local bikesexuals to provide human-powered transportation satisfaction Down Under!


Its our pleasure to promote the 2nd stage of the Pacific Rim Job Tour. Posted by revphil at 5:05 AM No comments:

The US government is about to shut down, again. Are you a "real American" who wants to keep immigrants out of "our land? Or, do you recognize that a mostly arbitrary line separates the US and Mexico and has become a tool to divide people?
Mexicali is just south of the border between Mexico and California. Calexico is just north of that border. While not the largest this is surly the most convincingly named twin border towns between the US and Mexico. Given their proximity and shared agricultural history one might expect them to blend together but differences in the culture couldn’t be more obvious. Even thou a simple chain-link fence is all that separates the towns they are microcosmic representations of their respective countries. For a dusty southwest town, the suburban sprawl around Calexico is oddly clean, sterile even. It seems devoid of any culture (although time there years ago was limited) and while the Sun scorches both sides of the border with equal indifference the US side feels less inviting, colder.
Meanwhile Mexicali has the classic virtues of not giving a shit about appearances from the outside of the building but focus instead on whats inside. Their markets are designed to induce engagement. There are other major differences between of course. Mexicali being 10-times the population of Calexico has its obvious effects, never mind the United States’ insane healthcare policies that have created a massive medical tourist industry (something this blogger knows far more than this article will cover).  How these twins grew apart to reflect their countries cultural identities is its own story worth telling.
But not here.