Back in the Saddle: a European bike tour adventure


We are driven to provide the finest, most ethical, human-powered bicycle pornography on Earth!

This Spring and Summer we will accomplish just that!

This year the submissions are from Oakland, Seattle, Florida, Montreal, Berlin, Milan and Geneva! Literally and figuratively all over the map.

We have a pretty ambitious schedule as you can see in our future route. Thousands of kilometers traversed by bicycle!

Bike Smut is a celebration of human-powered transportation and sex-positive culture.The content is completely audience generated.No reproductions or DVD's are available, so you must go to a screening to see them.

Films include of variety of representations of human sexuality,entirely created by amateur bike pornographers from all over the world!

This synthesis of transportation and sexuality is everything you could imagine it to be: creative, ethical, aware, explicit, tantalizing, candid, and silly! Since its inception, Bike Smut has toured North America 15 times, and in the summer of 2011 the project completed its first European excursion, playing 63 shows in 21 countries, from Scotland to Turkey. The winter of 2012 took Bike Smut on their first tour south of the border, featuring six shows around Mexico. The Bike Smut Film Festival is now in its 7th year, and the only way to see it is to attend a screening and experience it with others.

Bike Smut is at its heart, a community driven event. Besides the screenings we often coordinate with local groups to host workshops, skill shares, group rides, races, potlucks, and performances.

Are you ready to feel the strength of a steed between your legs? This film festival made by queers, cyclists and artists is only available in theaters.

Email ThisBlogThis!Share to TwitterShare to FacebookShare to Pinterest
Labels: Back In The Saddle, bike tour, european tour 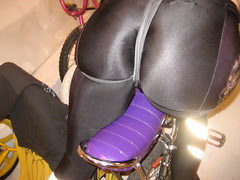