For ages we have struggled with finding an appropriate place to share our films in Ft. Collins.

Our first screening in Ft Collins was at Hodi's Half Note.  The music club had a nice feel and the workers worked to make it as comfortable as possible, but nevertheless it still felt like a bar and half of the audience shyly kept to the back.

The second time we had tried to work with various clubs at the University of Colorado. We had even attended a sponsoring club's meting so its members could know that not only were we real, but that we we also have near bulletproof ethics. In the end it was decided the safest and easiest thing was just to have everyone gather on the campus and ride around until we found an open door. Then we would rush in, set up, watch porn, cheer and leave before anyone was the wiser. The Afterparty was similarly amazing with a naked photo shoot to help promote the ideals of 350.org (which are pretty noble, if your not familiar)

The last time we were in Ft Collins we got to share our movies at an upcoming community space, Hammertime. The afterparty was again quite memorable and included a game of ninja freeze tag. 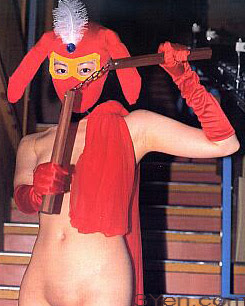 BUT THIS YEAR IT IS ALL A LITTLE MORE SERIOUS THAN NAKED NUN-CHUCKS!

This year we have secured the Lyric Cinema Cafe as our venue. This is one of those micro-cinemas that has been around longer than seemingly possible, considering most micro-cinemas only last a few years at most.

And there's no telling what afterparty action will go down, unless you are at the show, in the seats, ready to kick some naked ninja ass!
Posted by revphil at 8:00 AM