Whew! Its been an exciting start to The Porny Express!

Just as quick as we had learned the City of Minneapolis was preventing the Porny Express from screening at our friends at The Bedlam Design Center we found another venue at Ground Zero. It is a good thing we did, an estimated 150 people filled every seat and seat-like surface Friday night!

We have to thank Jessica Armbruster who helped blow up the show, bringing our eclectic smut to a broader audience.

Before, during and after the screening the rad women of Minneapolis were organizing Babes in Wanderland, a full weekend of bike events targeted at getting women comfortable racing their bikes. Seasoned allycat racers take rookies under their wing and teach them valuable skills to keep them safe and happy! On Saturday nearly 300 women raced! 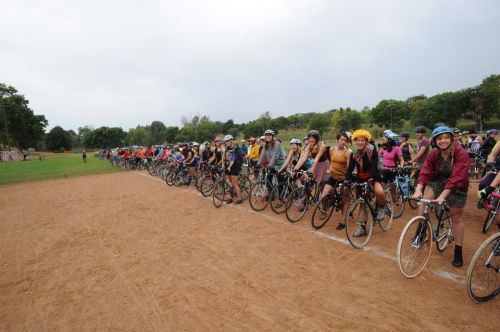 With help from Grease Rag, a nonprofit that works to help empower women, trans and femme bikers. Nice work ladies!

Congrats to the fine folks at Pornotopia and Self Serve. You fought for the rights of adults to be adult and not be ashamed. You won and you should be proud!