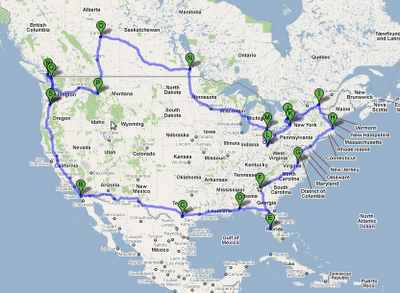 You hear that you American sprawlwads? The most sparcely populated city and they still have a

thriving bike culture. Enough so that they were able to entice us. The good people at BikeWorks were so kind as to harass us into making sure we were going to head all that way north.

Hell yea we are gonna go there! It is home to North America's largest mall, West Edmonton Mall (which was the world's largest mall for 23 years from 1981 until 2004),[9] and Fort Edmonton Park, Canada's largest living history museum. How we gonna miss out on that?

They even had a friggin THUNDER LIZARD named after them! Where the fuck is our Portlandsaurus at anyway?

Then it is on to Calgary where we get to play a fundraiser for their Anarchist Book Fair! Damn has self liberation ever looked so sexy?
Posted by revphil at 12:32 PM